This small coastal state of Central America that borders Mexico and Guatemala has wide white sand beaches and ideal conditions for water sports.

The most striking thing is that in its barely less than 23 thousand square kilometers there are so many different paradises: the offer of experiences of adventure, culture and nature that it proposes is almost infinite.

Although Belize City is not the capital of the country, it is the most populous city, the one with the busiest airport and an ideal starting point for touring the territory from end to end. However, the seat of the Government is in Belmopan, an opaque city, to the point that the traveler cannot suspect, being here, the wonders that await him at other stops. The people are friendly to the extreme: every time a local crosses a visitor, he says "Welcome to Belize." And it always sounds sincere, not like a phrase made. 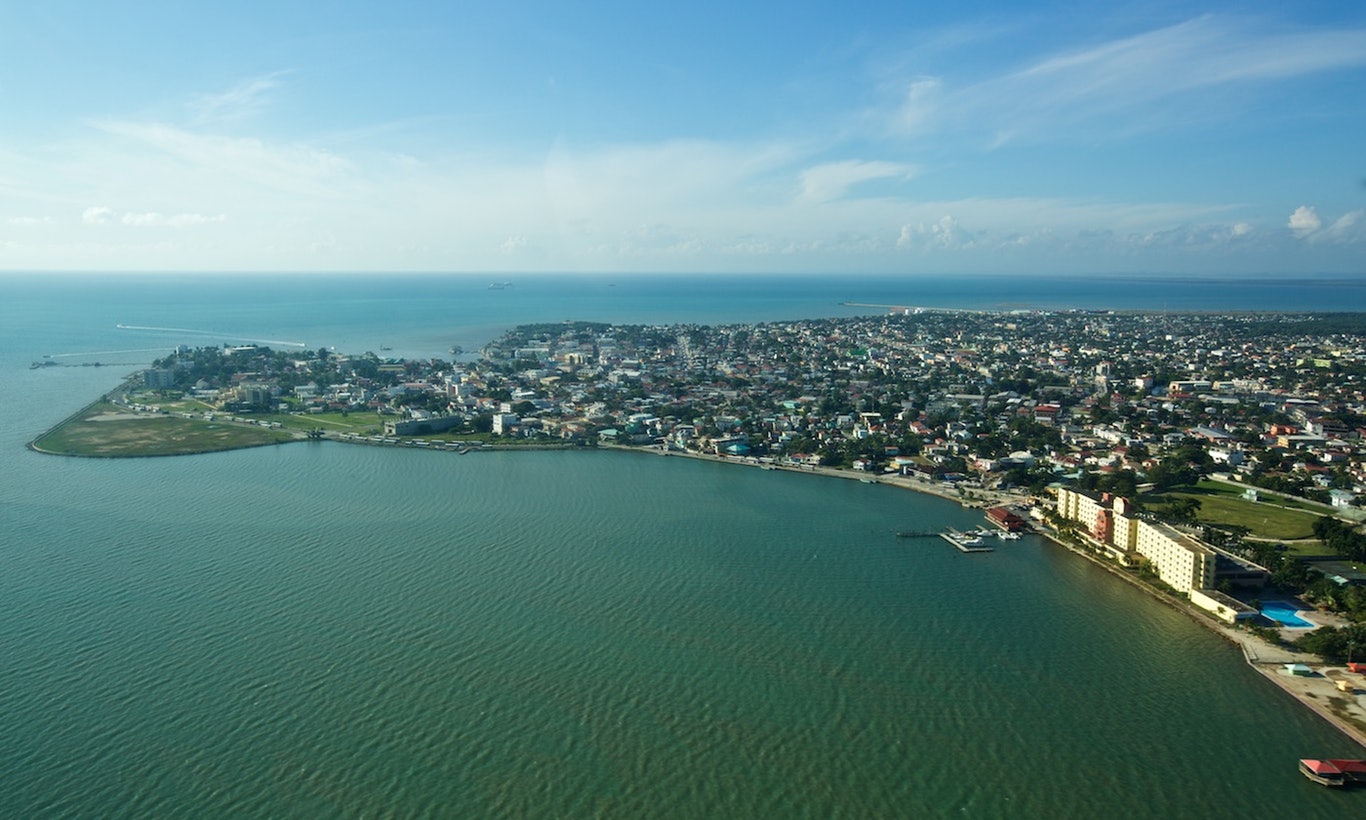 Through the doors of the "Tourist Villa", a sector of a few blocks where restaurants and handicraft businesses gather, the self-proclaimed Prince Carlos strolls: a man wrinkled by the sun and with white specks emerging from his chest outside The shirt ajar. He introduces himself as a history teacher and offers newcomers the various existing versions of the name Belize. If anyone suggests that he has no tip to give him, he raises his hand in a gesture of nonchalance and clarifies that he does it for the sake of knowledge, not for money.

Heading to paradise
The ferry terminal is a swarm: from here you can navigate to the nearby San Pedro Islands (which Madonna immortalized in “The beautiful island”) and Caye Caulker. The service is frequent and the trip, in either case, does not exceed half an hour. The terminal is pure chaos: the volume of the music of the surrounding souvenir shops is added to the screaming that the enormous amount of people implies. 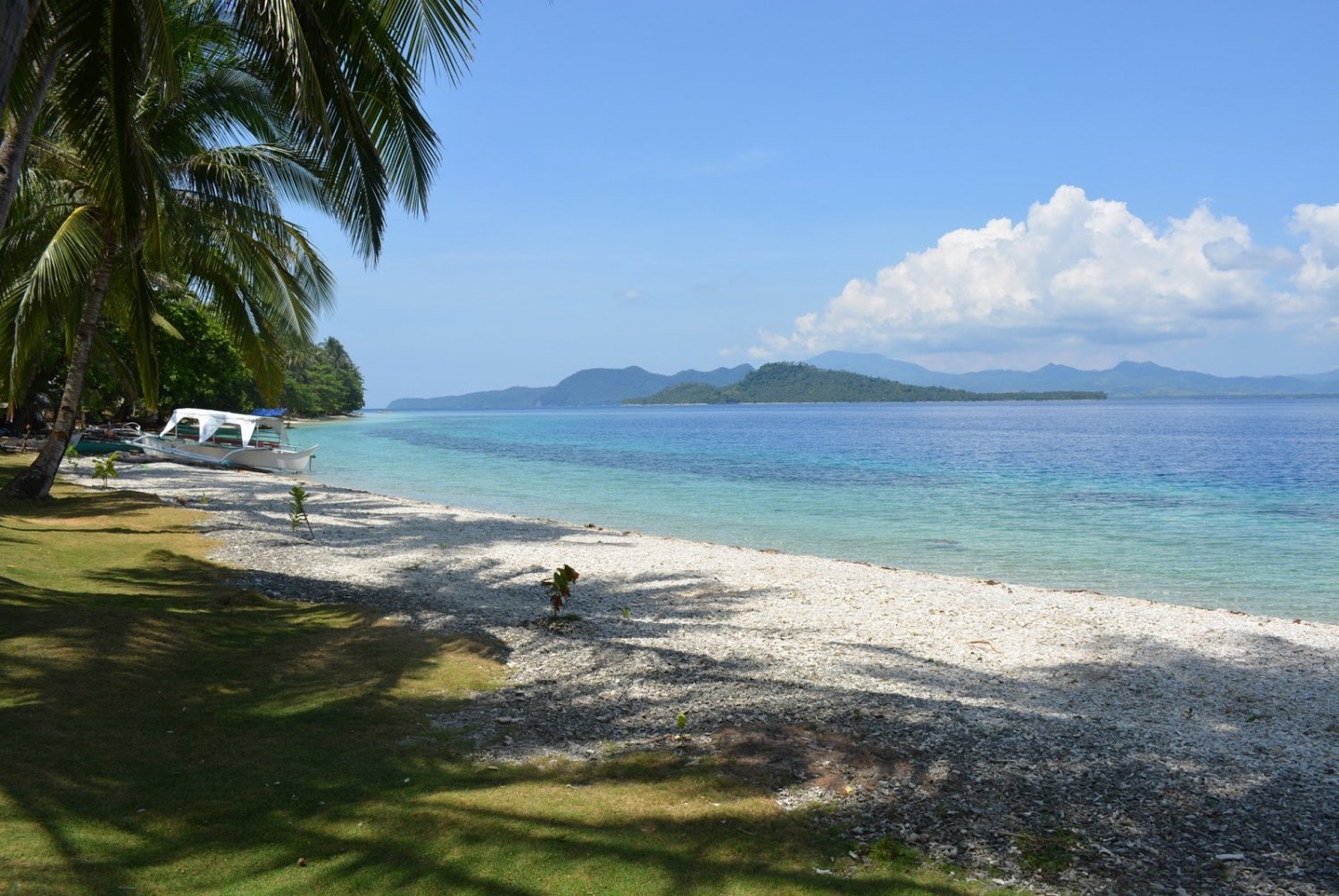 However, boarding is done orderly and on time. At the window, the query "What is the difference between Cayo Caulker and San Pedro?"

Caulker Cay
From the moment of disembarkation, Cayo Caulker manifests itself as a beautiful site. Next to the port you can see dozens of golf carts, some for rent and others that are used as taxis. The "best beach" is at the opposite end of the island and can be reached there for only eight Belizean dollars (four US dollars). 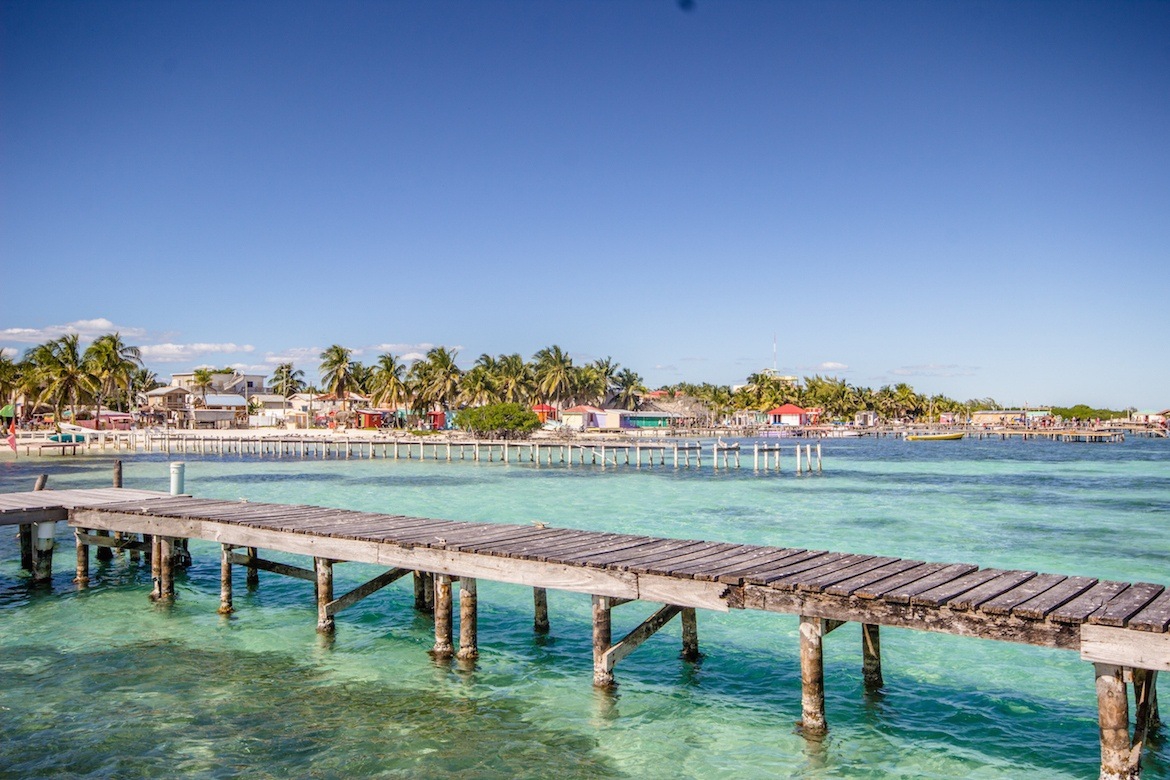 "To an American, for the same service, we charge twenty Belizeans," says Amer, one of the drivers. The town is picturesque and colorful. Businesses are small wooden cabins with large porches. The streets have no sidewalks and both cars and people drive through the same white sandstone.

A clothing store warns its potential customers: “No shoes, no shirt, no problem; no money: big problem ”(“ without shoes or shirt, no problem; without money, there is a big problem ”). In any given passage, an unscheduled stop: a descent to a water source where tarpones appear, gigantic fish that move round, with the attitude of knowing a tourist attraction.

Already on the beach, the water is calm and warm and the fish are seen with the naked eye. As in many sectors of Belize, the seashore is marked by a mini concrete wall, placed there so that the waves do not “eat” the beach. In the background, a succession of restaurants, such as The Lazy Lizard or Bluebeard, the latter a little bar with high tables located in an outdoor gallery and attended by a couple of Frenchmen, Florian and Pauline, who arrived from the outskirts of Marseille just over A year with his little baby to devote himself to his true passion: cooking. 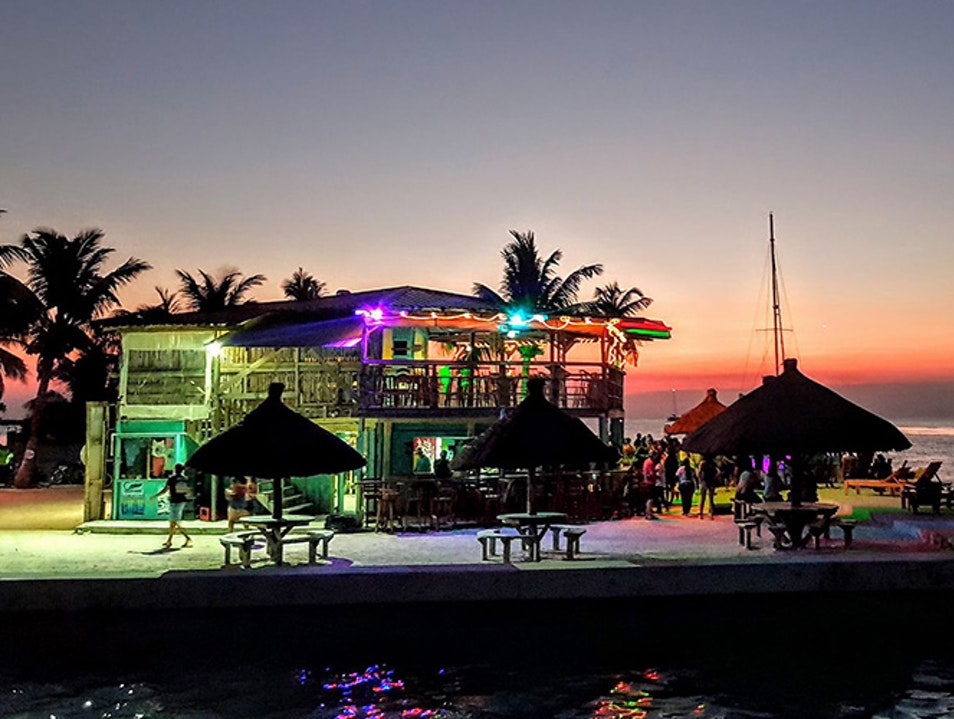 As mentioned, Belize's nature and adventure proposal is larger than the square kilometers the country measures. One of the proposals is a visit to the jungle area for activities such as quadricycle tours, cave tubing (gummies in caves) or zip lines. The road to the Nohoch Che’hen Ecological Reserve, the one chosen for this journey, is a well paved route through which numerous church buses circulate, micros in the style of North American yellow schoolchildren who take parishioners to the church. It is 45 minutes in a southwest direction with respect to Belize City. A letterhead leopard at the entrance of the park warns that these cats live in the area. "It is very difficult to see some, they are very nocturnal animals," warns the guide France Miranda: a plump man able to speak for hours without stopping, belonging to the aboriginal Garifuna minority, who celebrates his National Day throughout Belize on November 19. 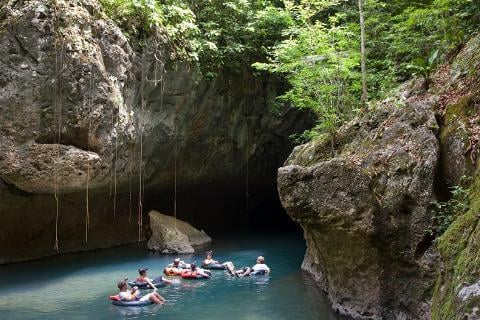 The activities are a pleasure in themselves and, at the same time, the perfect excuse to review that little paradise. The walk that leads to the cave tubing caves, for example, crosses water courses with stony ground in which the traveler is suddenly and unexpectedly immersed to the waist, surrounded by mountains impregnated with green vegetation intense. The journey with the gummies is slow, without frights. The guides motivate the search for forms between stones, quartz formations and stalactites. “There is‘ the turtle ’,” says France. “Yes, yes, the turtle!”, Everyone responds. Then, at lunch, the confession is almost unanimous: nobody saw the turtle. The zip lines allow you to visualize the foliage or rivers, which are seen as trickles of water, at about 70 kilometers per hour.

Mayan ruins
Also leaving Belize City, an hour away but heading west, is Community Baboon Sanctuary, a park where monkeys can circulate freely. And in the north direction are the Mayan ruins of Altun Ha. The area was occupied between 250 BC and 900 of the new era. It is estimated that in the surroundings lived between eight and ten thousand people, with a peak of occupation that would have occurred between the sixth and seventh centuries. In the access to the park all the national Belizean symbols are piled up: the flag, the tapir, the toucan, the black orchid and the mahogany tree.

Belize's main wealth lies in its sea. Snorkeling and diving activities are the order of the day, with several very nourished banks of species, which have their zenith in the Blue Hole, perhaps the main tourist attraction in the country. 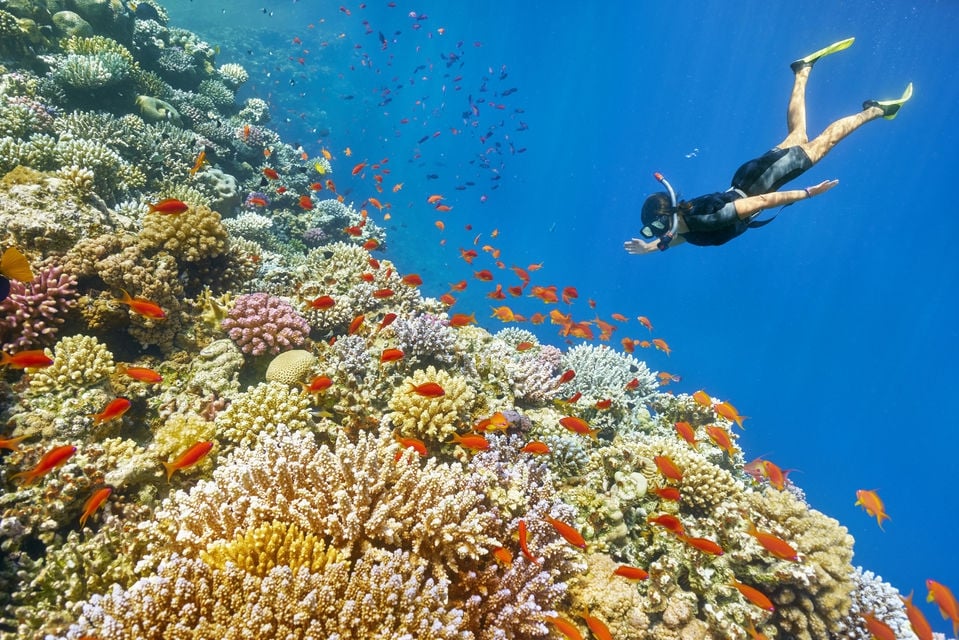 The place was made famous by French researcher Jacques Cousteau in 1971. It is a perfect hole in the middle of the sea with about 125 meters deep and about 300 meters in diameter "delimited" by a coral reef.

The name cannot be more precise: the water takes an absolute blue color. "Here there is a coast guard that controls from the number of boats that arrive until tourists accidentally kick corals," explains Beans, a guide from Mexico with his face covered in beard-fluff and his manners of extreme patience. "Each boat also has only thirty minutes for its passengers to travel the area," he adds. Under water, everything is life, color and movement: sponges, barracudas, angel fish, elusive sharks and even the fearsome lion fish, an "imported" species that lacks predators and that threatens the fauna of the place.